My friend Sunee has been a cooking instructor at Chiang Mai University for thirty years. When she has the opportunity to bring in another chef/cook/someone who likes to cook, she seizes the opportunity, both for herself and for her students. She is given the chance to step back for a day and assist, while the students are exposed to new ideas and  cooking techniques. 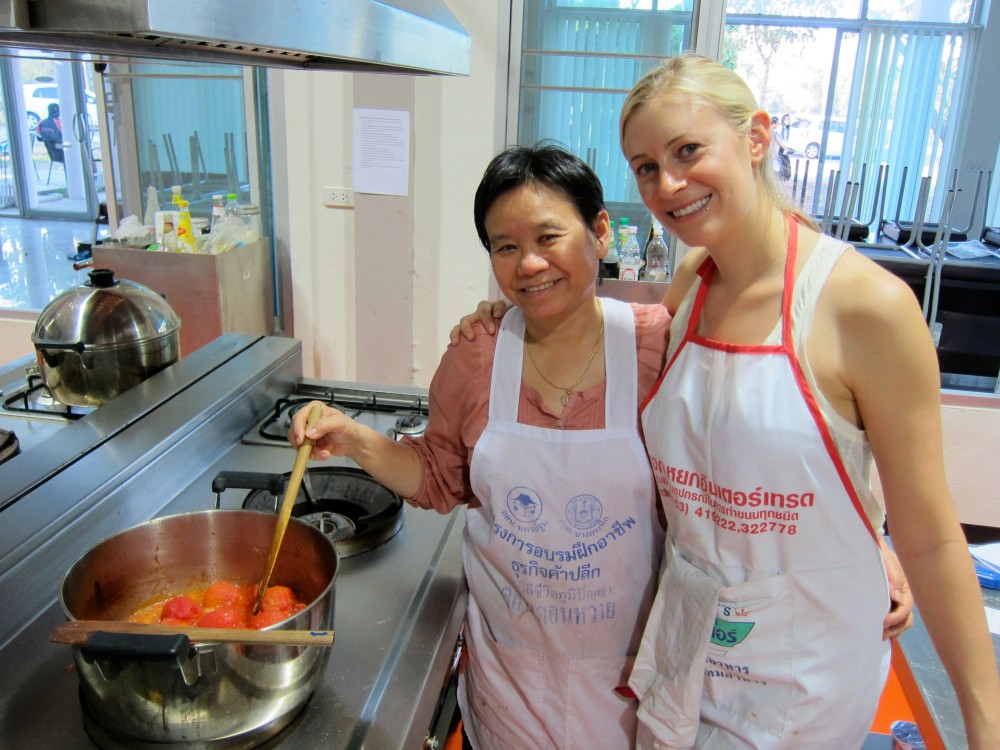 I had the opportunity to teach two classes at CMU. The first one I did was an American menu: Caesar salad, roasted pork loin with a shallot red wine reduction, mashed potatoes and a banana split ice cream sundae to sweeten the deal. It was a simple lineup of dishes, a menu we could tackle together and nothing felt overwhelming or too technical. And what’s better than finishing a meal with a Maraschino cherry on top?

After the success of the first menu, Sunee invited me back to teach another class. Well, maybe it was a “success,” or she seized the opportunity to let someone else deal with eighteen young adults for a few hours. Either way, she asked if I could teach an Italian menu. How could I say no? Italian: I never had intentions to pursue a European cuisine, always instead turning towards the fiery chilis and enticing umami flavors of Asian cuisine, yet Italian has turned into something I’m very proud to be cooking. Of course I would teach the class!

So today I taught a cuisine I’ve become intimately close with. After cooking at Del Posto for three years now, I feel confident with pastas, sauces and Italian sides. I took one of my favorite contornis by Mario Batali, his braised octopus, potato and celery salad, and substituted it with quickly blanched squid as the seafood component. I’m wild about octopus, but considering our time constraints in class, I think the squid was a nice, light alternative. It didn’t have the same rich depth of flavor as a braised cephalopod; it was a daintier choice yet still stood up to the strong Thai celery, waxy potatoes and tangy red wine vinaigrette. I think the students also were amused with cleaning the squid– one student asked if the quill was plastic! The finished salad was enticing and bright and used Thai ingredients in a way the students hadn’t seen before.

We simmered a simple sauce of onions, garlic and tomatoes. It was summery yet restrained, like a fruity white wine served over ice cubes. Fun and not a notch too serious. We tossed al dente bucatini, olive oil, grated parmesan and torn basil to finish the dish. It was one of those pasta dishes where you want to take the pot and a couple of forks and sit outside with friends and talk about spaghetti stories of yore. Perhaps a bottle of wine, no cups, could be passed amongst friends. Isn’t that what pasta is made for? Pure comfort. There were no meatballs to roll off tables here, just sauce and noodles to be pushed around until the only sounds left at the table were clinking of spoons and forks tickling teeth.

My favorite dish that we made tonight was pumpkin ravioli. We grabbed some wonton wrappers this morning from Muang Mai market to save ourselves time (aka cheating) by not making pasta dough. We cooked pumpkin with honey, whipped in some eggs and mascarpone, and grated nutmeg over the sunny colored puree. We set up an assembly line and the students pumped out perfect raviolis, scalloped edges and all. A quick cook in rolling salty water and then a toss in butter and the pumpkin pasta was ready for its jewelry adornment vis a vis chopped Macademia nuts. The raviolis were dripping in nutty accoutrements; if they walked down the red carpet at the Grammys, Gucci diamond wearers would have a hard time hiding their envy. Buttery, sweet, savory and crunchy, this ravioli garners attention, and deservedly so.

We finished the meal with tiramisu. I’m not the most highly skilled pastry chef, so I figured this was a simple, easy to execute dessert. Layers of sweetened whipped cream, lady fingers and espresso. Baking 101. We assembled the dessert without a hitch and put it in the fridge so the flavors could mingle and get to know each other. Or so I thought. After we all had too much pasta and were struggling to find the dessert pocket that most of us have in our stomachs, I realized the students had put the dessert into the freezer. The tiramisu was more ice cream-like than creamy, luscious spoon-sinkable-like. But everyone seemed to love it, so the minor flaw was overlooked (probably because there were cookies, cream and chocolate involved).

Cooking is not only fun because it’s what I love to do, but it feels good to get others excited about something that’s so natural, so fundamental yet so creative. One of the kids, Aomi, told me that after he graduated school he wants to work in an Italian kitchen. I am thrilled  to share what I’ve been taught by my own incredible mentors. Though I haven’t worked every station at Del Posto, I get to see a whole lot, whether it’s the mamis making pasta, or my pastry chef Brooks experimenting with new savory components to compliment his sweet creations, or my head chef Mark’s tweaking and editing of a dish until it’s a beautifully orchestrated story of sensations and tastes. Cooking is about pleasure, providing for others, inventing for your soul, and creating something beautiful and satisfying. A manifesto on a plate. I feel like I got to pass along a bit of my crazy passion to a few unsuspecting students today. And I have a feeling they might have enjoyed it as much as I did.