I’m so full! Can I be cheesy and say both physically and emotionally? Good, there I said it. I just got home from one of those evenings that leave goosebumps on your arms because it was so fun and full of great people.

My friend Andy, a chef who is wise in the ways of Thai cooking, linked me up with his long-time friends here in Chiang Mai. I’d been corresponding with Sunny for about two weeks and finally today we met. He picked me up near Chang Puak gate, where I was lazily resting by the river, and whisked me off to Rimping market. But first we stopped and grabbed a coffee and chatted. Andy had already told me a bit about his friends, but when Sunny began gabbing I fell immediately in awe.

Sunny’s mother began working in one of Chiang Mai’s local royal palaces as an assistant cook. Over the years, she became one of the main cooks of the kitchen and would occasionally enlist Sunny to pound curry pastes and assist with some of the more tedious cooking tasks. Though he didn’t look at cooking with an eye for learning (it was more of a chore to pound pastes for an hour!), he later realized that most of what he had learned came from working with his mother. Now he and his sisters (one specializing in Southern, the other Central and another in Isaan style cuisine) learn from each other…and occasionally argue over whose technique is better. I was curious about Sunny’s cooking style; I’ve only read a bit about Royal cuisine, so I was eager to see how this food would differ from the Central Thai food I’m more familiar with. Not to mention his story sounds straight out of a fairytale book to my Western ears. Royal cooking?!!! Sign me up.

We quickly ran through Rimping market and gathered ingredients for dinner and then hopped back in the car to make our way to Sunny’s house. As we wound our way through a charming, lush neighborhood, I pointed at a house and gasped at the size. It was palatial. Sunny laughed and nodded, and then minutes later we pulled up to his house… which happened to be the palace! I’m sure my cheeks were cherry tomato red. We set up shop in the kitchen, pulling out all the ingredients we had bought, and a few more from the bountiful garden where he practices the art of green thumb-ery. We set up cutting boards and got to work. 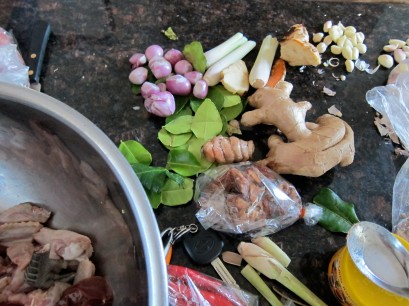 We cooked for hours (and by we I mean mostly Sunny and his friends). I was enlisted to help peel garlic and taste curry pastes, sample fermented soy beans and cut and nibble fresh fruits. It’s a difficult job to be expected to taste so many things, so if anyone ever needs me to step in as a substitute taster, please think of me first. I’ll make that sacrifice!

One aspect of eating and cooking I truly relish is being surprised with new products. I make it a point to try everything and anything that crosses my path, so it’s exciting and fun when a new product encounters my lips. Today I tried a new fruit (a jujube) and fermented spiced soy beans (similar to miso but more exciting because it’s laced with chili). Two new products…kinda a big day for me.

Sunny cooked dish after dish, with the ease of a professional cook. He walked me through every step, instructing me on proportions, ingredients and technique. He had me taste raw products, half cooked products and of course the finished products to understand what was going on along the way. He cooked all Northern Style food; not a drop of coconut milk could be found anywhere. This is so different from the Thai food I think we are most familiar with in the states. Northern style instead profiles the heat, the tang and the earthiness of ingredients and doesn’t tame flavors with too much sugar or fat.

We dined on Gaeng Han-lay, a curry that’s stewed slowly to braise pork shoulder and beefed up with pork belly to infuse some rich, heady notes. The individual notes melded and melted into a beautiful harmony of flavors. We used raw vegetables to scoop up nam prik ong, a quick stir fry of chilis, minced pork belly and fresh tomatoes. This dish is so savory and satisfying that it reminds me of a bolognese that has been stewed for hours in your Italian grandmother’s kitchen. You could happily dress pasta with it (Thai-Italian fusion could be the next big trend!). But no, instead, within a matter of 10 minutes we had a fresh dip that tasted like an entire day had been devoted to its production. It’s incredible the flavors that can be coaxed out in such a short cooking time. This is definitely far from French cuisine and 6 hour sauces.

Sunnee, his friend from University, cooked up an elegantly simple chicken soup, fragrant with lemongrass, kaffir, tumeric, galangal and shallots. The broth was rich and bright–heavy handed with light flavors. Lastly, as we were putting all the dishes on the table, Sunny whipped up a quick eggplant and long bean dish that was seasoned with freshly pounded green chilis, garlic and shrimp paste. A touch of oyster sauce added some robustness. The dish was truly simple in regards to ingredients and yet a flavor bomb of wonder resulted in the mouth.

I couldn’t help but oooh and ahh after each bite. This was easily the yummiest meal I’ve had in the North, and rivals all other great meals I’ve had in Thailand. Unpretentious home cooking at its simplest, yet it was far from simple tasting. Sunny set out to please and instead impressed the hell out of me.

After dinner, we sat around and chatted over a giant plate of fresh fruit. I was already full from the meal, but the fruit here is so sumptuous that it’s nearly impossible to stop the ‘hand to mouth’ action. We slurped ripe mangoes, crunched into crisp pineapple, rose apples, and jujube, and de-segmented juicy bits of the fresh-from-the-garden pomelo. Thailand can one-up every other country just on fruit alone. The fruit filled in any remaining gaps I might have had left in my tummy and made it nearly impossible to get up from the table elegantly.

I left the kingly quarters and royally talented chefs and hopped into Sunnee and Anthony’s car. I was grinning ear to ear with the awareness that I not only had acquired new cooking skills but, more importantly, new friends. It was a delicious affair shared with incredible company. I think I’m going to have a harder time pulling myself away from Chiang Mai than I had originally thought…

Leave a Reply to Joy (My Turkish Joys) Cancel reply