This past week has been a blurry whirlwind of lectures, demos, chefs and friends. It began last week when my uncle forwarded me a snippet from The Washington Post that mentioned that Ferran Adria was coming to D.C. to talk about his newest cookbook and the transformation that El Bulli will be undergoing in the next few years. I quickly clicked on the “buy” option and secured a ticket to one of the culinary scene’s most influential chefs.

A few days later, after a majorly delayed bus ride down to our nation’s capital, I arrived to a sold-out auditorium at George Washington University. Ferran didn’t need any goading or leading. He was ready to discuss the past, present and future. Ferran first showed a gorgeous video, set to David Bowie’s Ground Control to Major Tom, about the evolution of his restaurant, his food, and of himself.

He spoke of the importance of transformation, and how routine is the worst enemy. I felt myself cheering “Hear, hear!” (in my mind, of course). He was referencing his food, cooking techniques, even the media. His mother opened the newspaper one morning and exclaimed “In the papers again??” Ferran realized it was time to change gears. Once your mother gets tired of seeing your name in print, you know something’s wrong! So at Madrid Fusion, an international gathering of notable names within the industry, he announced a two year sabbatical

He realized it was time to take more risks, to have more uncertainty in his life. So he’s transforming his restaurant into a Think Tank, an Idearium, and a Brainstorming center. He’s aiming to stimulate chefs’ creativity in a new format. He gestured excitedly throughout the talk and simply asked the audience “What is creativity?” He answered his own question, simply stating to be “Honest and ethicial. And don’t copy!” Ferran is a man who has created his own path, following no one but himself. Now, with the idea of a school for culinary minds to gather, he will take the food world in a direction it hasn’t yet seen. 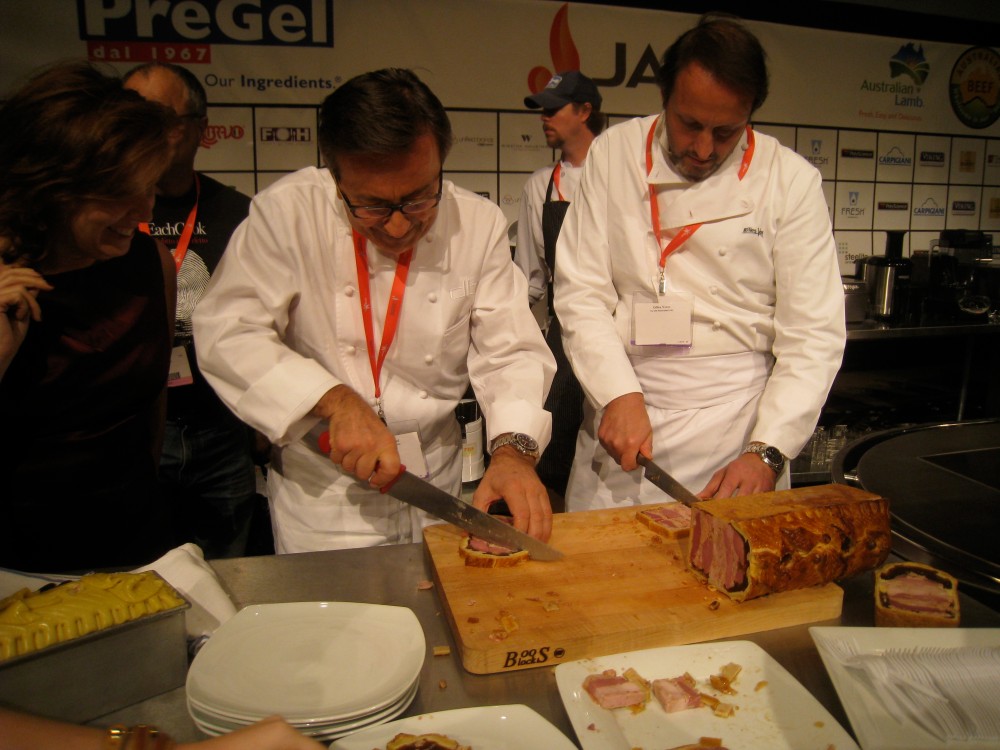 The International Chefs Congress aims to do this as well, yet it only exists three days out of the year. It’s on a much smaller scale, but with the same intention of sharing ideas, knowledge and creativity. Chefs from all over the world, representing a variety of specialties, come to share in the craft of food and hospitality. Some chefs talk about native ingredients, others reveal new concepts and technology, some cook, while others just talk.

Being totally obsessed with food as I am, I was giddy with schoolgirl delight when I read the line-up of speakers. How often do you get to meet multiple masters of the same profession, all in one room? It’s a symposium of savory and sweet culinarians! It’s like having Joni Mitchel, The Doors, Van Morrison, Steely Dan, Marvin Gay and The Clash all hanging out, talking about music, and sharing their emotions through their art, all in one concert. All notable musicians but very different styles and skills. I’m basically like a 70s rock star fan, only it’s with chefs, cooks, and people who like to talk about food!

Pierre Hermé did his usual, unconventional pastry demo. He rethought the idea of a cake and turned it into a dish, wish many layers and experiences to be had in every bite. He combined partially dried olives with mascarpone and layered it between flavors of tomato and strawberry gelée, tomato puff pastries, and fresh layers of the two fruits. It may sound like an odd combination, but Pierre works the ingredients like a gardener tends to his vegetables. He just knows flavor combinations like a farmer knows what day to harvest. It’s intuition and experience. His second cake was layers of wasabi gelée, fresh grapefruit segments, candied grapefruit segments, candied rind, and macha green tea marshmallows. How intriguing is that?!

I took both cakes back to the kitchen and sunk my spoon through the layers of unusual pairings. A few people joined and we basically stood over the cakes, eyes wide with surprise and amazement. The cakes were light, rich, oozing with zing and crunch and chew in all the right places. Not only are the cakes beautiful little pieces of art, but the flavors are unlike any cake you’ve ever had.

His collection of Ispahan macaroons that have made him so wildy famous in Paris took years to catch on. At first, no one cared for his combination of flavors:  rose, lychee and raspberry. He maybe sold one cake a day, he said. Ten years later, it’s his staple, his Chanel suit. He sells 30 cakes a day now. Trends may take a while to catch on, but with faith (and perhaps obstinance) you can be successful. France now sells yogurt, syrups, and cookies all with this trio of flavors. It caught on. Hermé’s resounding message: believe in your direction and expect everyone else to catch up. In his case, they do, and it’s not hard to see why.

Chris Young gave a demo, pulling several examples from the tomes of his Modernist Cuisine cookbook. I helped him measure out, to the gram, pea puree for a centrifuge demo. I was in the main stage kitchen, watching his left brained, analytical, totally methodical mind in action. He organized his products, gave strict instruction to his chef Kyle, paced (a lot), and showed me how to work a centrifuge machine, all in a very controlled manner. His demo and cookbook break down every technique–such as braising, roasting, brining– with science and years of testing to show you what yields the best results. There’s no intuition involved here, just numbers and settings and controlled environments.

Young demoed how to create the perfect crust on pastrami. After days in a sous-vide machine, cooking low and slow, he wanted to crisp the crust without cooking the meat any further. He dumped the now un-kryovacked meat into liquid nitrogen for a few seconds, and then immediately into a frier for a few seconds. The two extremes basically cancel each other out. The oil doesn’t have time to penetrate more than the frozen crust, so the meat doesn’t continue to cook in the fryer, nor does it absorb oil. The result is a perfectly crunchy crust on a perfectly decadent pastrami. Well done, Chris Young and Science.

Though there were many, many demos, my personal favorite was Chef David Thompson’s. He came out right after Chris Young, holding only a mortar and pestle. We were still clearing the scales, beakers, thermal circulators, centrifuges and vacuum sealed products from the stage. David looked out to the audience with a sly grin on his face and said that his presentation couldn’t be any more different from what they just saw.

Chef David turned to me and handed me the pestle. He showed me the proper method of pounding (not straight up and down, but with a loose, wobbly wrist), and had me pound right through the majority of his 45 minute curry lesson. To say my arm felt like jell-o is an understatement. It felt like jell-o that was smacked around on the tray table of an angry toddler’s highchair. But what an invaluable experience: to have a personal cooking lesson from the master of Thai cuisine. Who cares if my arm felt like it was about to fall off!?

He had me stop and smell after he added each ingredient to the mortar: kaffir, galangal, lemongrass. As I pounded, he spoke about the feelings involved in cooking. In Thailand, old women gather with their mortars, pestles and ingredients and pound and chat, chew the chew and laugh. Cooking is about community and making others happy. Cooking is about practicing a dish until you can look at it and judge by color, texture, and smell, and know by these clues when it’s ready.

As we began to cook the curry in rendered pork fat, he had me smell it over the course of several minuets. “Do you smell that? Can you tell it’s salty?” He added a dollop of palm sugar to round it out. He looked at it and added a handful of chilis. He had me taste again. We tasted and smelled, tasted and adjusted. After close to ten minutes of working with the curry, we tossed in fragrant basil and then poured the curry into a bowl. The audience applauded.

Simplicity, feeling, intuition. The International Congress’ theme this year was the Sixth Sense. Out of all the incredible chefs that gathered to talk about food, and learn from each other, Chef David Thompson was the shiniest star in the sky/kitchen. He doesn’t use modern technology (no blenders or robot coups in the kitchen) nor does he always measure. He finished his demo with “Don’t over think. Just do.” Cooking is passionate and soulful, and dropping bags into circulators doesn’t quite feel as impassioned as mortar and pestling your own country style curry.

I feel totally full from the past week’s line-up of incredible guests and lecturers. I’m already counting down the days until next years event. A few days of of food stimulation goes a long way for this eager girl. As Steve Jobs so notably said, “Stay hungry. Stay foolish.”

I aim to do just that!

For more pictures, check out: http://docsconz.com/