Chiang Mai is up-country.  Many Thais and expats prefer the laid back atmosphere of this charming city to the bustle and buzz of Bangkok.  My girlfriends  came to travel Thailand so we decided to head North for a bit of excitement.  But we didn’t go for the cool and quieter side of Chiang Mai…oh no, we went for Sonkran.

Sonkran is the Thai new year, which is basically a week long water fight.  Originally, Thai’s used to dribble water on each other’s shoulders as a means of cleansing and bringing good luck and prosperity for the new year.  It has now evolved into a major event, with people drenching each other with buckets of ice water, while some sport tanks on their backs with hoses, and many carry super soakers.  We made our way to Chiang Mai with the intention of thoroughly soaking up the festivities. 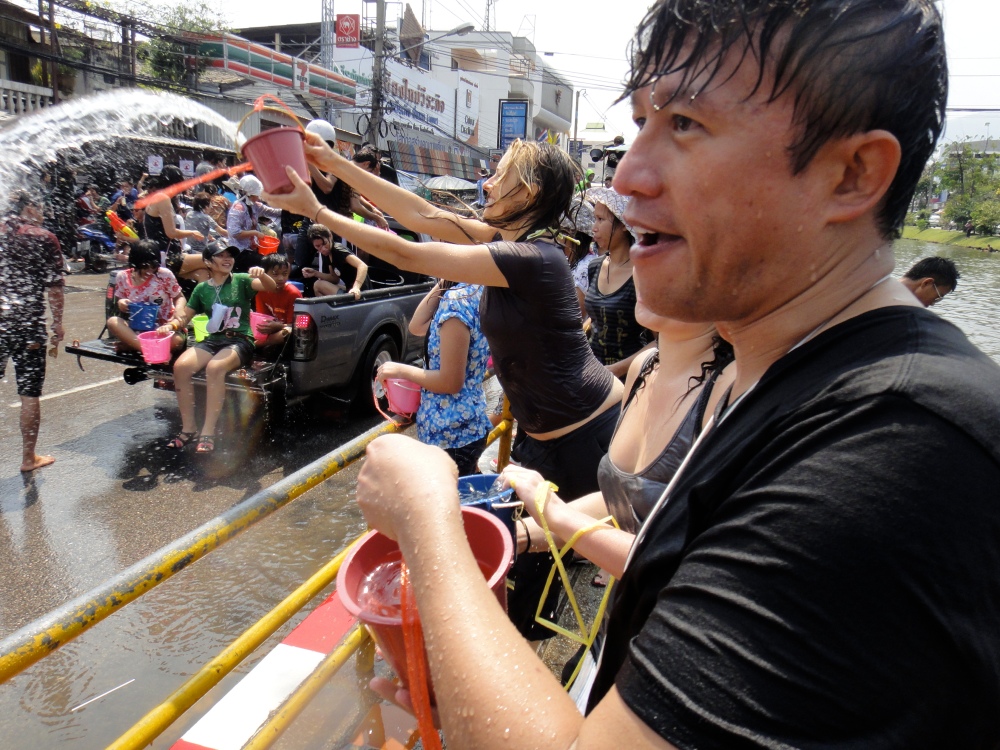 The first day we arrived, however, it was chilly and raining.  We wore ponchos through the streets and only attracted more attention.  People aimed for exposed spots and some even poured buckets of ice water down our ponchos. The second day we decided to wholly participate; we bought buckets and positioned ourselves near the moat.  We threw buckets of water from late morning til early evening. It is probably my favorite holiday ever- it’s like the fun of Christmas, Halloween and neighborhood water fights magnified by 100.  Music blares, people throw water on you while they smile and say “Sawadee pi mai (happy new year)” and it’s all too much fun.

We decided to stay a bit out of the city center since Sonkran attracts so many tourists and locals alike.  The streets are jammed and trying to navigate through them takes hours.  We stayed at a hostel called Spicy Thai, which I won’t recommend only because it was a bit too far from all the happenings and the prices weren’t great.  But the owner was Thai and had some great food recommendations.

He sent us in the direction of a tiny restaurant called Hong Tauw Inn.  We had walked past the restaurant earlier and I had noted its cute ambiance, but assumed it was higher end and meant for Westerners.  We stepped inside to the rustic eatery and made our way to the back.  Simple designs accented by warm lighting and inn-style flourishes made us content before the menu even arrived.

I think I let out a little gasp when I opened the menu to read the prices.  It was almost comparable to street food prices, ranging between 50-100 Baht for most items!  I couldn’t believe we were dining in style yet paying prices for things that normally come in plastic baggies for takeaway.  We poured over the menu, making the waiter come back several times before we could finally decide on what to order.

My friends ordered khao soi (a well-known dish from Chiang Mai), fried pumpkin, phad thai, and I ordered a coconut nam prik and a pomelo salad.  I’m kind of obsessed with Thai salads and their use of fish sauce, tamarind, lime, palm sugar and spice which creates the most perfect salad dressing.  You hit every single taste bud, electrifying the sour spots, buzzing the hot spots, soothing the sweet spots and nipping at the bitter ones.  Fish sauce offers the umami that rounds everything out with a robust salty component.  I eat a salad every day and figured I may as well try the pomelo, a favorite yet hard to find salad in my neighborhood in Bangkok.

My salad came out and I was quick to dismiss it as great based purely on the appearance.  In the south, my salad is vibrant and light, dressed with a touch of coconut, peppered with lemongrass and toasted nuts while cilantro adds a burst of citrus-y green.  This salad was dressed with a thicker sauce, milky red and only garnished with fried shallots and chilis.  Just by look, I figured it couldn’t compare to the lighter, brighter salad I’m accustomed to.

After about two bites I was hooked.  I called the waiter over to tell me what exactly went into the sauce.  This salad packed punch– coconut, chili, lime and fish sauce dressed the chunks of pomelo.  That’s it.  But the mix was heady.  Sweet, spicy, smooth.  And the fried shallots added the textural crisp component.  It didn’t need the peanuts or the greens.  It was perfect as its own version.

I also ordered an incredible vegetable dip.  Down in Bangkok, my local lady starts spooning my nam prik into baggies before I even reach her cart.  I’ve tried all of them and settled on the roasted eggplant that’s mashed with fried garlic, fried chilis, scallions and cilantro as my favorite.  It’s always perfectly seasoned and accompanies really any dish you want to pair it with.  In Chiang Mai, I figured I’d try something new.  I originally was curious about the mango prik, but they were out of it.  So I went with my second choice, fried fish and coconut prik.

A small dish of milky white, paired with raw fresh vegetables and white rice was delivered to the table.  We all dipped our spoons in the bowl and tasted.  Paused.  Looked at each other and went back for more.  The coconut was stewed with minced pork, shallots and red finger chilis.  The top was generously dusted with fried minced fish.  The fish was light and crisp, more there for the texture than the taste.  The coconut was rich, not only from the coconut cream but from the savory pork that stewed in it and released a rich meatiness.  Sweet, mildy spicy, rich yet mellow.  We dipped the vegetables, the rice, and the pumpkin in the prik.  Eventually it came down to just scraping the bowl with our spoons.  I would have opted for fingers had the restaurant not been so nice!

Karina’s khao soi was perfect.  This Burmese inspired yellow curry noodle dish was the richest and most balanced I’ve tasted.  Made with coconut, this curry is livened up with the addition of pickled mustard, sliced raw shallots, lime and cilantro.  Fried noodles crown the dish and offer crunch.  We all passed our dishes around and tasted and nibbled, and eventually devoured, everything.

Not only was the price more than affordable, but the quality of the food was tops.  Each dish we ordered was definitely some of the better versions I’ve had (if different) since I’ve been in Thailand.

We chatted with the waiter for a bit (more of me asking to please detail every ingredient in every dish!), and we found out that the restaurant has been around for 25 years.  And if you ever walk down the street and notice that there are no cars and the roads are barricaded, it’s because this restaurant also happens to be a favorite of the royal family! Delicious, quaint, affordable and loved by the King’s family.

Not a shabby recommendation for our last night in Chiang Mai.

How much in Chiang Mai?